The Marist project has the special feature: it is not the work of one Founder.

The differences in the congregations reflect not only the gender differences of the founders, but also the differences in their personalities and temperaments. Jeanne-Marie Chavoin, for instance, understood clearly what Jean-Claude Colin meant when he spoke of the insight that gave birth to the Marist project, but her ideas of a Marist congregation were quite different from those envisaged for her by Colin.

Marcellin Champagnat was captured by the original plan, and saw that it led inevitably to a congregation of Brothers – something the rest of the group never really understood.

Jean-Claude Colin himself developed the original plan along lines that reflected his own personality and spiritual experience.These differences which come from gender and personality go to make an extremely rich and multi-faceted spirituality.

And while each branch has its own characteristic features and spirit, there is a clear family likeness, and there are common elements in all the Branches of the Marist Family.

A common undertaking. All Founders ot the Marlst project speak of “The Work of Mary” as being the common task to which Marists are called. This phrase was “heard” at the very beginnings of the enterprise, and was used by all the Founders.

A common mission. Marists of all congregations know that their proper place is in this secularised world. Further, they are missioned to the margins of, this world, and to the edges of the Church, to people who have lost or have never had faith.

A common desire. The pioneer Marists understood that they were called to share Mary’s desire to “gather all” into one new People of God, and to form among themselves ”me mind and one heart” as in the early Church.

A common leader. From the beginning, the first Marists were captured by the realisation that they were the first congregation to have Mary as their leader. All branches look to her as their first and perpetual superior.

A common approach. Conscious of who their leader is, Marists of all congregations know that they are called to live a life of simplicity and openness to God, seeking God alone, and bringing to the Church a maternal spirit

In three particular areas Marists share a common likeness: the name they bear, the spirit they share, and the virtues which are the cornerstones of their lives.

Fr Colin said: “If a Marist sees about him someone who could profitably work in the Society of Mary, he will perhaps say a word or two, but without departing from the spirit of the Society. This concern, this interest and attachment, should extend to the other branches of the Society: we all form one body. Without any collusion, everything appeared at the same time and without effort Let us then love the family that God has given us.”

Our four congregations have developed differently with emphases that bring out the rich diversity of the Marist inheritance. And each highlights key elements in that inheritance.

The Marist Brothers have preserved a strong sense of family and of the zeal of the first missionaries in the Bugey. Year after year in many countries they bring the Gospel to new generations of young men.

The Marist Sisters have kept in a striking way the simplicity and graciousness of the Holy Family at Nazareth.

The SMSM Sisters have preserved in its primitive purity the missionary impulse of the first Marists. In their new Constitutions they write: “Missionary service and the Marist vocation were but one single call for the pioneers and those who followed them.” (No. 47).

We would nevertheless expect congregations with different histories to reflect their differences in their work with the laity. The approach adopted by the Marist Brothers in the Champagnat Movement, for example, is very different from what Father Colin had in mind though both approaches have something in common. Each branch of the Society should respect the initiatives taken by the others and give them full support.

To be a Marist is to be called and chosen, through a love freely bestowed on us, to live the Gospel as Mary did, in a Society which bears her name.

Our Congregationis characterisedby the desire to make the mystery of Mary in the Church the daily inspiration of its life and action, and not by any special work nor by the promotion of any particular form of Marian devotion.

Whatever we do, the value of our witness will be strengthened if we avoid drawing attention to ourselves, simply fitting in wherever we can be of service, seeking in return neither esteem nor acknowledgement. The personal inspiration of our Founders, “Hidden and unknown in the world”, forcibly recalls this ideal for us.

We wish to respondto the calls of today with the daring and zeal of the pioneers.We want to keep alive this daring – simple, joyful and prudent – based solely on the love and power of God in order to announcethe Gospel in its force and integrity, learning to adapt ourselves to different cultures and conditions of life.

We do our best to remain faithful to the Spirit of the Risen Saviour, who gives us, as he did the first Christians, the grace to live “one in mind and heart”. 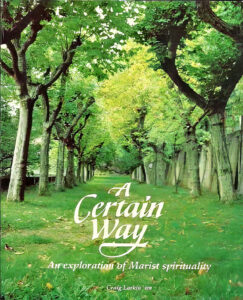